Technological advances and industry development are displacing Japan's traditional farming methods. Viewed from a production increase and labor saving perspective, these changes have produced remarkable results. At least, this is what is commonly said about the modernization of agriculture. The so-called modernization has been promoted primarily from a capitalist viewpoint, one from which it is extremely difficult to hold out hope and positive expectations for the future of our nation's agriculture. Fundamentally, it is important that agriculture be considered not only from a financial standpoint, with health and national survival as priorities over economic concerns. This perspective requires that we not only hold out hope and expectations in the face of extreme difficulty, but also address the urgency of confronting some extreme underlying problems in current Japanese agriculture. Specifically, that present farming methods cause farmer workers to suffer from recurring work-related illnesses, while pesticide residue poses a serious threat to consumers of farm products. On cropland, farming which degrades soil fertility and decreases rich topsoil is encouraged. If these phenomena, having only occurred over a short period in recent years, continue their rapid advance and are compounded by industrial pollution, they will soon pose an inconceivable threat to human survival. The situation has become urgent, and we must draw upon our collective wisdom to find radical coping measures. To this end, Japan Organic Agriculture Association (JOAA) has been established, through cooperation with other kindred souls, for the purpose of seeking out and investing in the foundations of farming as it should be.
Recently, Katsumi Yamada, JOAA member, contacted us requesting for Back to Eden DVD's to have Japanese subtitles. 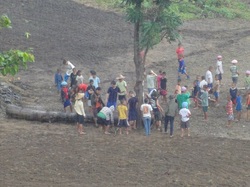 "I am the principal of a Christian school in a somewhat remote area of Thailand. Agriculture is an important part of our program. We haven't shown the film yet to our students. We will probably start with some of our teachers, since the film is in English, and about half of our teachers understand English well enough to get something out of the film, and a much smaller percentage (5%?) of our students might." - Harvey Steck, Principal


Help us translate Back to Eden Film into Thai.