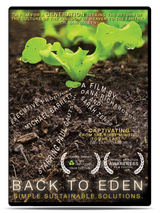 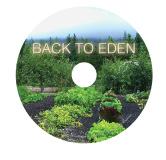 Back to Eden DVD

BACK TO EDEN is a life-changing gardening documentary about American gardener and arborist Paul Gautschi. The film ignited the global gardening movement "Back to Eden Gardening." Paul is the pioneer of a no-till regenerative organic gardening method that implements wood chip mulch to conserve water and regenerate the soil. Back to Eden Gardening is a regenerative agriculture technique that implements organic gardening principles and is considered one of the best sustainable permaculture methods for growing food.

Buy BACK TO EDEN DVD​ to watch incredible Bonus Features including Paul Gautchi's answers to frequently asked questions, a fruit tree pruning demo with Paul, seed-saving instructions, and more! The DVD is the best resource to learn how to grow a Back to Eden garden and orchard!

Add to Cart
Watch BACK TO EDEN to learn how to grow a vegetable garden with less work! The BACK TO EDEN documentary shares the story of Paul Gautschi and his lifelong journey, walking with God and learning how to get back to the simple, productive organic gardening methods of sustainable provision that were given to mankind in the garden of Eden. After years of back-breaking toil in ground ravaged by the effects of man-made growing systems, Paul Gautschi has discovered a taste of what God intended for mankind in the garden of Eden. Some of the vital issues facing agriculture today include soil preparation, fertilization, irrigation, weed control, pest control, crop rotation, and PH issues. None of these issues exist in the unaltered state of nature or in Paul’s gardens and orchards. ​The food growing system that has resulted from Paul Gautschi’s incredible experiences has garnered the interest of visitors from around the world. Never, until now, have Paul’s organic gardening methods been documented and shared like this! BACK TO EDEN invites you to take a walk with Paul as he teaches you sustainable organic growing methods that are capable of being implemented in diverse climates around the world.

Paul Gautschi is a gardener and is known locally as a master arborist. In 1979 Paul and his family moved to the Northern Peninsula of Washington. As a father to 7 children, he has grown food for his family and friends – never to sell. Paul gives lively tours of his orchards and gardens to international groups from 1 to 450 who have also enjoyed the fruits of his labor. ​

BACK TO EDEN was Produced and Directed by Dana Richardson & Sarah Zentz and released on August 21, 2011. ​The documentary went viral and received millions of views which ignited a global gardening movement called, Back to Eden Gardening.